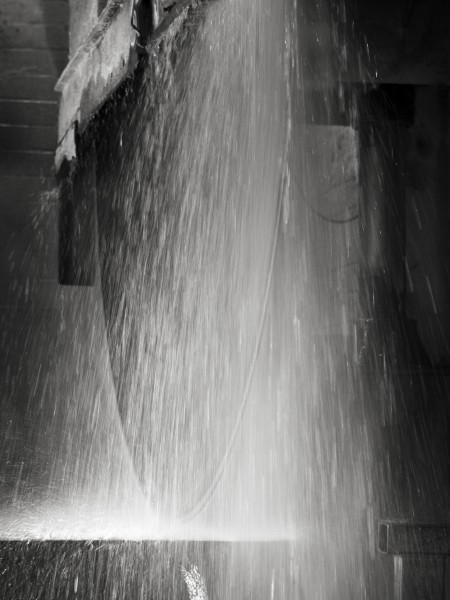 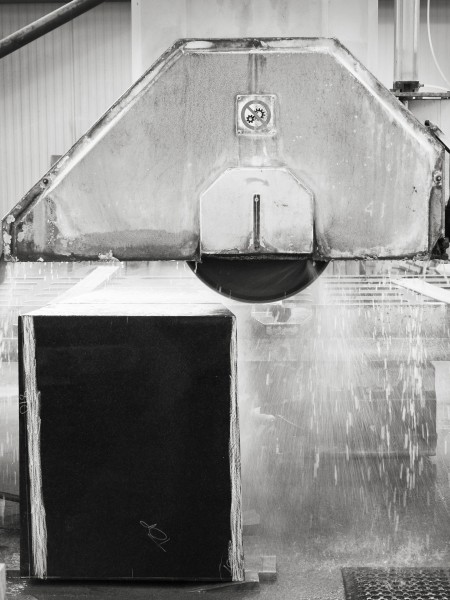 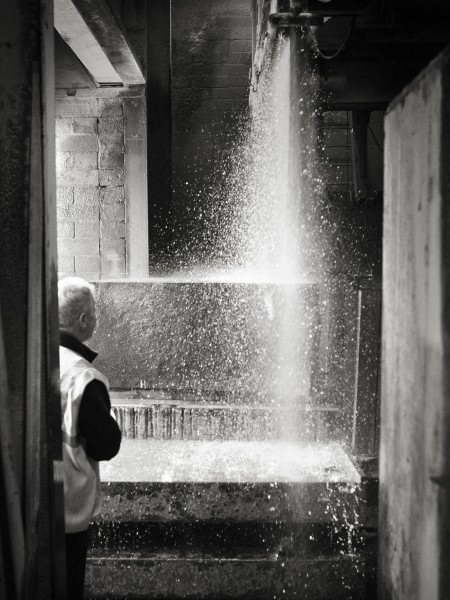 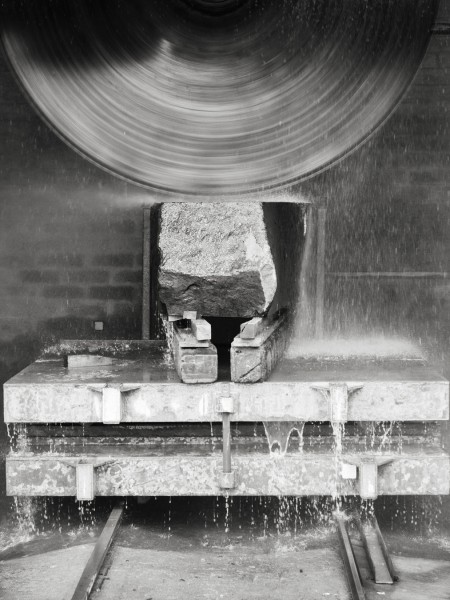 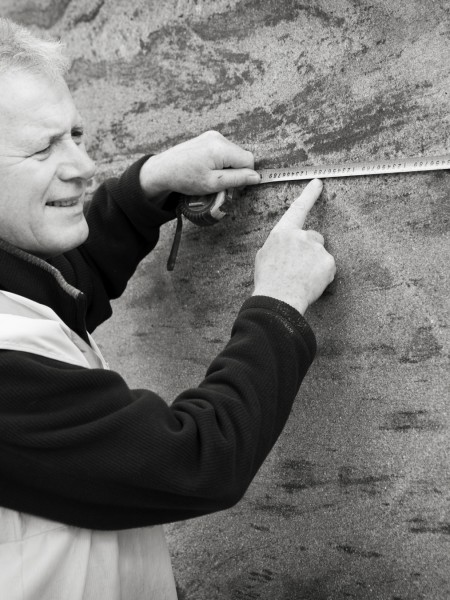 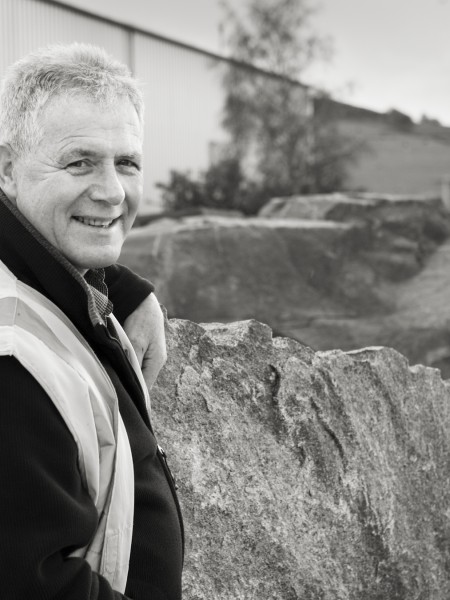 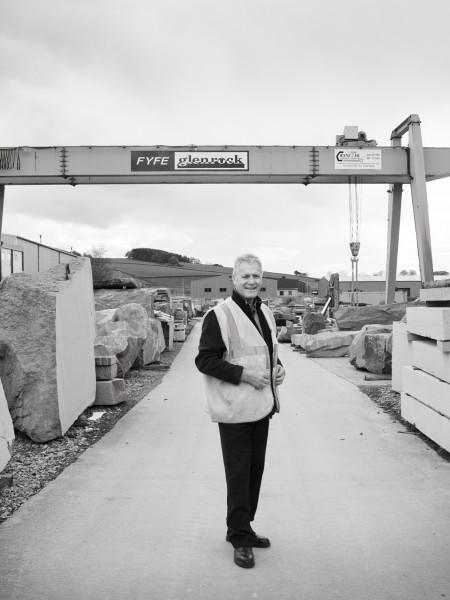 Q. How long have you been working in this profession?
A. Since 1966

Q. And how did you learn your skills originally?
A. I started off as a stonemason. The apprenticeship was then for four years not three like it is now… prior to that it was five years … Within two years I was in the drawing office then from the drawing office into management of sorts and then at the ripe old age of 21 I came back in as the manager of the stone business …

Q. How would say the nature of the business has changed over the years; the things you make and the tools you use?
A. Fyfe has always had a great cross section of working with memorials. Kitchen work, that’s relatively new, within the last ten years but memorials have been around for a couple of hundred years. Prior to that it was always bridges, engineering work and architectural work, that was Fyfe’s forte and that hasn’t really changed. The only thing that has changed is the machines that are processing it. The big changes … took place probably late 50’s when sawing techniques changed and got a little bit better with wire saws.
At that time old gang saws were still around chugging away but wire saws came on the scene and then the real big change probably in the mid to late 70’s with the introduction of diamonds – industrial diamonds of course, and things like the 3m block saw which just changed things massively. .

Q. Were the old saws made out of metal?
Yes, steel blade. Now The big frame saws, the three meter block saw, has diamond, industrial diamond, the wire is diamond but in the 60’s the wire was just a high tensile wire.
I think the next big move in the last ten years are those machines in there that are CNC operated; where there’s a little PC that controls its operations,

Q. Do you train people?
A. Yes, an apprenticeship is three years. We give them a good cross section of training because to work with stone will take you three years; there is no easy way around learning to work with stone.
Machines help a lot to cut to size but those L-shaped units you saw at the factory and that finish that’s on that face, you don’t get to do that within a few months, it takes three years and even then there’s good masons and not so good masons.
Most of them do it for the love of it, it’s rewarding because we’ve got guys down in the workshop there that would earn more money doing other things other than stone masonry.

Q. Do they specialise?
A. Sort of, a trainee will drift away from masonry and concentrate on one thing.  We’ve got the hand polishers, again we give them a little bit of training in hand polishing but the tools they have today make it ever so much easier to polish than in the old days….today its much easier with the diamond tools… But again it’s down to the love of it because we’ve got a couple of lads in there that just love polishing stone, ‘Don’t give me masonry, don’t give me sand blasting don’t give me machines, I just want to be polishing.’

Q. That’s great, have they been doing it for a while?
A. Yes. We’re a little bit age heavy down there just now because the young lads we’ve been training … they usually make the three years, then its bye bye.

Q. I’ve heard that said before, that young men having that cross section of skills, are really valuable in the oil industry.
A. Absolutely yes.

Q. So the young apprentices are still being trained with all the basic skills?
A. We still frighten a poor apprentice stone mason by giving them a lump of stone and telling them we want a flat face, ‘You’ve got to make the face flat and the only way to do it is by hand’, the way they did a few thousand years ago.  And that gives you the skill to be able to work with a hammer and chisels.

Q. So they’re still learning those fundamental skills?
A. We still try and introduce that because its so important. Absolutely, so important. But it no half upsets a lot of the young lads that come through the college with the idea that everything to day is ‘press button’ and computers.

Q.  How do you think you can keep apprentices from not disappearing to the oil industry?
A. I think that’s just Aberdeenshire… it’s probably me because I’ve come from the old school where we were given that sort of basic training to begin with.
You might have a different outcome if you said to a young lad that had just come from school,. ‘We want to teach you how to work that polishing machine. It works with windows XP. It comes up on the screen you feed in all that information then you sit back and watch it or you go and do something else’. If we did that to begin with we might have different results. But rightly or wrongly we believe in telling them, ‘This is what its all about, this is the trade you’re about to join’.
One of the great successes I’ve had over the years in the work place is when we’ve had apprentices, they’ve worked with us; they’ve left us and they’ve set up their own businesses as stone masons and some of them are very successful stone masons. So that’s good. It’s not all bad news.

Q. Has the Internet has affected the business of the years?
A. Right, if you wound the clock 15 years ago I would have said, ‘what Internet, www what?’. Now, everything that happens in this office is so reliant on the computer. I was doing everything by fax, that’s all gone now, even our phone systems; if we don’t have a desktop switched on upstairs the phones don’t work!

Q. Do you get much business through the Internet?
A. No, we have a website of sorts, we get a little bit from that, but most of our business is generated by architects and contractors that know us and from retail stone masons selling memorials to the public.

What are the greatest pleasures you take from what you do?
Making money! Keeping my wife happy! If I was to switch on my company hat, it’s got to be customer satisfaction: 100%. And we do a lot to try and make sure that we get it right first time.