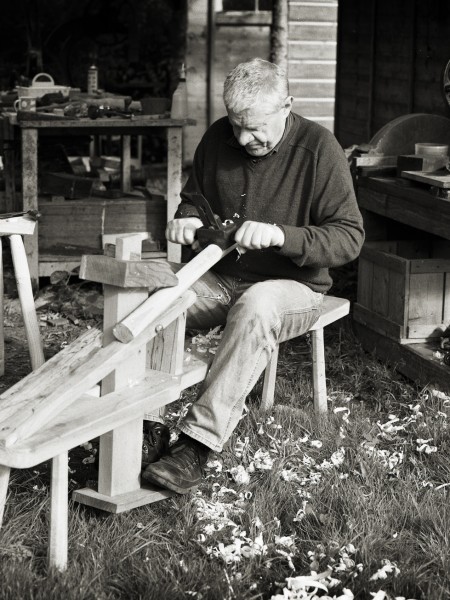 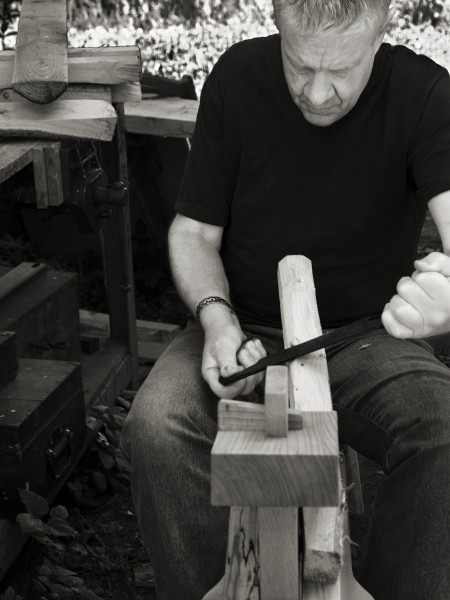 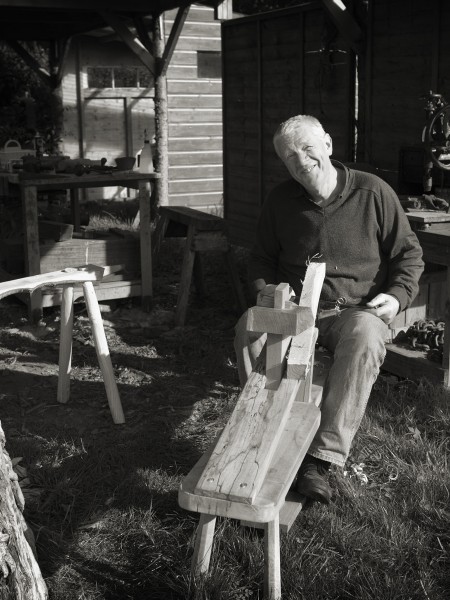 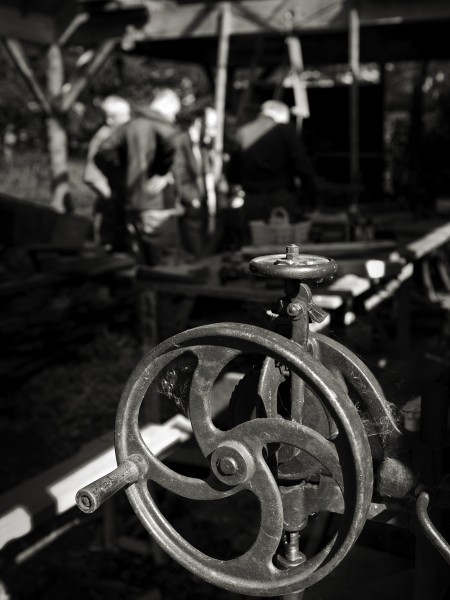 Q. How did you learn to do this sort of work?
I did woodwork at school and made myself a bit unusual because I went to Robert Gordon’s in Aberdeen and really it that was sport was more important and I hated sport.

Q. But they had a good woodwork department?
A. Pretty good yes, but you got a chance to make things and learn, I found it fascinating. I did drawing – engineering drawing and that was allied to making things, you know.

Q. So then what did you go to do afterwards?
A. Oh many things, I went to sea, worked on farms, traveled for about seven years, round Europe, North Africa, all over the place, then I did architecture … and then had to make a living because I was married by that time and the children were coming along so I did what I found easiest which was making furniture, restoring furniture, I love restoring furniture and now I’m into antique tools and stuff like that. So I teach antique tools at the evening classes by stealth, because that isn’t what they’re coming for, they’re coming to learn how to make things . I only teach hand methods: sawing, chiseling and I think quite honestly that’s more appropriate to what most people need … I just think not enough people know how to make things by hand and don’t have the confidence to proceed – if they want a coffee table, why not make it? It seems obvious.

Q. So when you say teaching are you teaching people to come and work for you?
No, evening classes. Yeah, it’s getting more popular but really I’ve been doing it for about twelve years now and I concentrate quite a lot of my effort on that and it’s quite a nice way of doing things because I see myself as a bit of an artist you see, a creative person, but I’m not really that fussed in doing – in producing anything specific -  but I can do that through other people. I enjoy that because they say ‘I want to make a book case but I want it to be out of different wood’ and I’ll help them to do it, then I’ll help them to make it. So in a way I’m doing it at second hand. So that’s nice.

Q. And the people that are actually working in the mill – can you tell us more about them?
A. A few of them I took on years ago, but I handed over to Graham Winram… about ten years ago I think. So he employs them. They make mainly kitchens, and anything else that crops up, with machinery by and large.

Q. Where  do you get the wood from?
A. Well, that’s another thing I like to use local wood, so this for example, the back of this chest of drawers this is weeds, they were elms growing at the side of the river and we cut them down because they were in the way, and I thought well, there not what we usually like to use but well cut them up into planks and quite honestly it looks fantastic.
What we’ve done there is broken away from convention again because convention says that when your making money out of timber you’d buy stuff that’s like 14” / 15” diameter and they you cut it up into planks, this stuff was only about 10” or 12” but because I don’t care, I don’t have to make money out of it and I’m quite interested in how things are going to look, we’ve don’t that and it’s been very popular, the trees are gone now but it’s all into peoples furniture.

Q. I was just thinking about people coming to the classes and why is it that they come because, as you point out, they can actually go to Ikea and buy cheap tables. We’ve been talking about people living in rural Scotland, and it’s quite isolated, so it’s really important to have the opportunity to talk to people and if you can do that whilst your making something satisfying as well then I can see that that’s a really important social function, it’s a really great thing to be providing.

So do you think society or the government or the council should be taking a bit more care to be preserving these sort of opportunities or skills or training? Any ideas how they might do that?

A. I don’t know how they ever would to be honest. I can’t see what would happen to change that and I’m getting to a stage where I haven’t go the energy to even try and do it. But I do think there is a moment now afoot, I’ve got a lady here now that does recycling – Nina – now she does that and I think there is a movement afoot maybe, it’s just too late for me but where people are getting more interested in small scale stuff like that were people are not just throwing stuff out automatically and just taking pleasure from simple things that were made a few years ago, all that kind of thing is good stuff.

A. I just love doing it and I won’t be stopping, although the time is getting very close when I could stop, but I’m not going to stop … I’ve got web sites, I’ve got something like half a million hits on You Tube… I get very little actual feedback from it and I have put in my email address but half a million hits is pretty good.

Q. Whats the video of?
A.There are twenty videos of me making furniture.

Q. So people can do it themselves?
A. Yes.

Q. How has the internet changed what you do or how do you use it?
A. The Internet, I use it a lot. I buy my old tools for example on Ebay and that’s a very good way of filling in the gaps of any collection. This is a whole collection, all this stuff here, a company called Mathieson & Son Glasgow who were the biggest tool makers in the world at one stage and so that means there’s quite a lot of their stuff around so I collect them and a few other makers as well – Aberdeen makers – could speak about them, at length!

Q. And you’ve uploaded your films, the educational films?
A. Yes, and I think – well you know maybe when the Internet started I thought this is wonderful this is going to be a way of popularising what I do. But it never actually made an awful lot of difference, although a lot of people say, if I say ‘how did you hear about my evening classes?’ they say, ‘we went on-line and you’re the only person doing it’, possibly in Scotland just about.

Q. How does the Internet help? A lot but not enough.
A. I had a lady working for me for years who’s a marketing person who was working for a few people, but I think she just can make more money working for a company and I miss her because she was good. She came in for a morning a week but just to sort of keep the thing afloat. So it isn’t a forty-hour a week job.